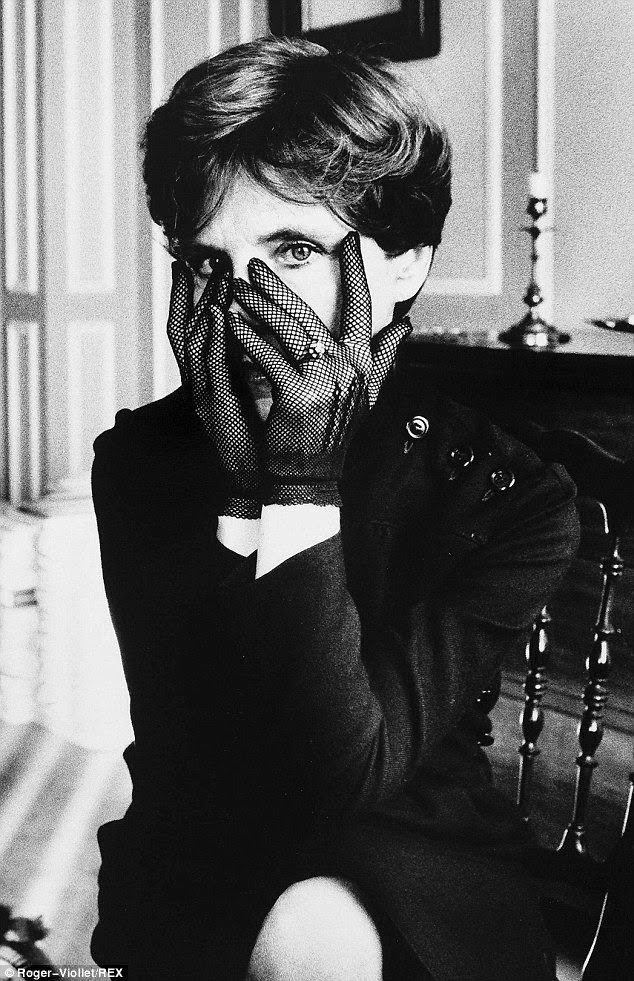 An illustration of mine (one of my favorites) will also accompany a story by Tosh Berman in the Black Scat Review, which will be released in the Spring.

Back in October of 2015, just a few days after my Alain Robbe-Grillet inspired art exhibit at Holyrad Studio, I sat front row at FIAF to hear Catherine Robbe-Grillet and her partner Beverly Charpentier speak, with Toni Bentley moderating. Catherine talked about the ceremonies she conducts at her 17th-century French chateau and her journey from being a submissive to becoming a dominant. 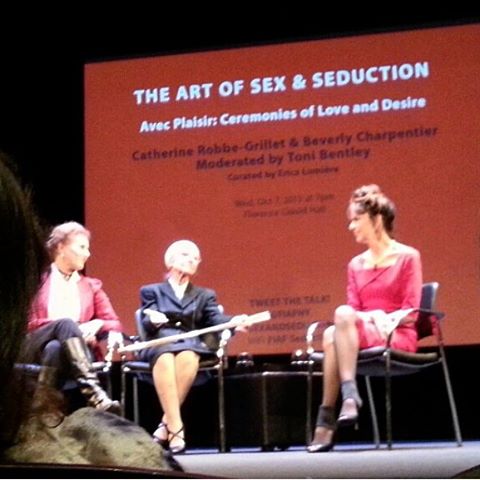 When asked if she misses being submissive, her reply: “No. I am both dominant and submissive because I live as a submissive through Beverly.” She was witty and funny, and Beverly was competely charming. Catherine inspires me enormously (I mean, look at what she’s wielding!)– it was a truly moving experience. One of my favorite lines said by Beverly in the Vanity Fair article by Toni Bentley: “It is not about pain. It is about how to suffer beautifully, like Saint Sebastian.” If you’re curious about their relationship, I urge you to read that fascinating article.

I got to meet and talk to Catherine and Beverly afterwards. What a once in a lifetime opportunity. I told her I would give her any painting from my Alain Robbe-Grillet series that she wants. Anything for Catherine! On a sidenote, I saw one of my favorite directors in the book signing room– Radley Metzger. I didn’t recognize him until someone said his name as he was leaving. I would’ve loved to have spoken with him. Metzger directed the gorgeous 1974 masterpiece The Image, based on the classic erotic novel by Catherine. The book was banned and burned when it was released in 1956. Catherine was 25 when she published the book.

It was quite surreal to hear my name in a conversation between Catherine and Beverly (in French) before the screening and have them come up to me. “We’ll speak after the film,” Beverly said after they greeted me. After the film and the audience talk ended, I waited for a long time as various admirers came up to them. Beverly mentioned how patient I am and then translated to Catherine everything I said to them about my recent Alain Robbe-Grillet inspired art exhibit in Brooklyn.

“You are converting people into Alain fans!” they exclaimed cheerfully.

They were also thrilled to hear how everyone who came to the reception during my exhibit loved the screening of Trans-Europ-Express.

The three of us then walked into the adjoining room where everyone had gathered and Beverly insisted I get myself a cup of wine before it was all gone (I listened, of course). They were extremely charming and funny as we talked about non-prurient topics (I didn’t feel the need to ask anything and the audience had done all that already during the talk after the screening).

As we said our goodbyes, Beverly asked, “Are you ever in France?” I said I’ve been there once and I always plan on going back. “We will keep in touch. Let me know if you’re in France and we will meet again.” A truly amazing night, one I will never forget…